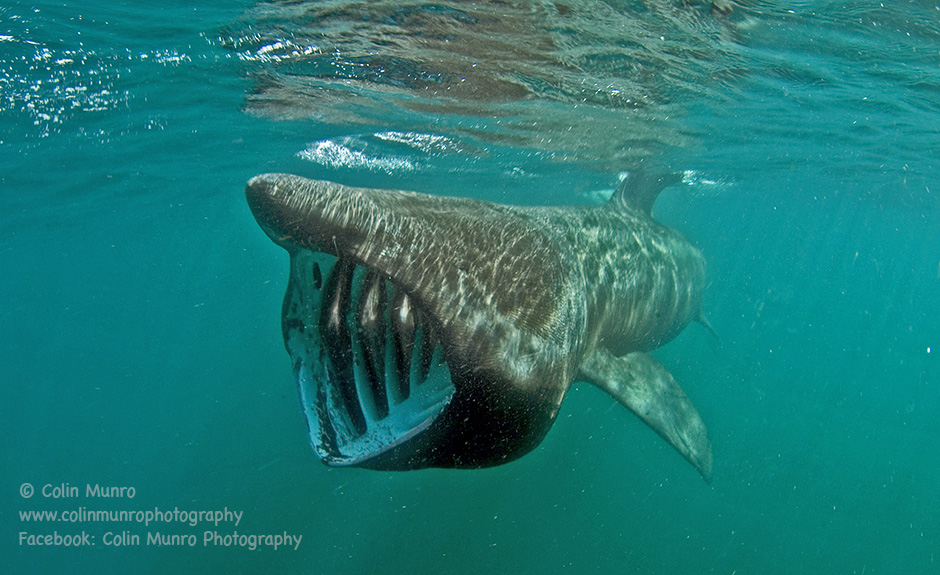 I clearly remember my first in-water encounter with a basking shark.  Quite a few years ago now, I had gone out specifically to try and video a basker underwater.  After a couple of hours we spotted a pair slowly circling a ball of plankton.  I slipped mask, fins and snorkel on and slid in to the water.  Basking sharks can be sometimes be wary and dive when one gets close, but these two seemed quite unconcerned by my presence.  I floated on the edge of the plankton ball and watched them circling.  As one approached out of the gloom I started to swim towards it.  Even through you know it’s quite harmless it is still a strange feeling watching a six metre long shark swimming straight towards you with its mouth wide open.  A mouth I could easily fit inside.  At the last moment the shark would alter course slightly and cruise past me.  The experience was similar to standing too close to the edge of the platform watching a train go past.  Again and again the sharks would circle and cruise past, sweeping by less than a metre from me.  Just me and two large sharks.  It was a mesmerising experience, but I could not help thinking ‘this is so easy!’ Little did I realise at the time quite how lucky my encounter was.  Several years and quite a few attempts would pass before I was able to repeat the experience.

The basking shark, Cetorhinus maximus, is the second largest fish in the World. Mature adults commonly reach between six and and seven metres in length, occasionally reaching around nine metres. Despite their massive size basking sharks are quite harmless. They are gentle filter feeders. During summer in the north-east Atlantic they can often be seen swimming close to the surface with their mouths gaping wide. A baskers’ gape can be over a metre top to bottom, so that’s pretty wide. As they swim forwards water is forced in to their mouths, passing across their gills where oxygen is extracted, and out through their large gill slits. This water flow serves a dual purpose. The arches between the gill slits are covered in long stiff bristles called gill rakers. These gill rakers sieve the water flow, retaining planktonic organisms. This is the food of basking sharks. In northern Atlantic waters they feed especially on copepods (planktonic crustaceans) particularly those of the genus Calanus, which occur in enormous numbers in the North Atlantic. Large numbers of such tiny creatures are required to sustain something as large as a basking shark.  Therefore baskers need to filter very large volumes of water.  It has been estimated that around 1.3 million litres of water will pass through the mouth and over the gill rakers of a large basking shark every hour.

In the North East Atlantic basking sharks start to appear off the tip of Cornwall (SW England) in early May.  This co-incides with what local fishermen call ‘May-water’, where the coastal seas turn green and turbid due to the seasonal population explosion of plankton.  Throughout the summer months sharks will move northwards through the Irish Sea and around the west coast of Ireland.  In the years immediately following WWII the author Gavin Maxwell ran a basking shark fishery from the island of Soay in the Inner Hebrides, exploiting this northward seasonal migration. The operation was beset with problems and drove him to the edge of bankruptcy.  Basking sharks were hunted by Norwegian and Irish boats also. Due to concern over dwindling numbers, the basking shark received full legal protection in  U.K. waters in 1998.  The last British shark fisherman, a larger than life character called Howard McCrindle, ceased operations a year earlier.  The basking shark is now protected throughout E.U. waters. In 2006 hunting also ended in Norwegian waters.

Despite their large size, relatively slow movement and surface feeding habits there is much that remains unknown about the life history of basking sharks. Each year the they appear in late spring, then disappear again at the end of September.  Where they go and how they live for the rest of the year has been a mystery, and remains so today, though we are starting to get tantalising clues as to the the answer.  Occasionally, basking sharks would be caught in trawl nets during the winter months.  Some of these were found to have shed their gill rakers, suggesting they were not feeding.  This lead to the theory that they became dormant in winter, hibernating on the seabed.  This theory had a certain plausibility to it.  Basking sharks have enormous oil-filled livers.  The liver can be 25% of the sharks body mass (the low density oil gives the shark buoyancy, allowing it to swim efficiently at the surface; it was also this high quality oil for which they were hunted). It was suggested that this enormous store of liver oil could sustain the shark for months without feeding. Recent research using data logging tags has begun to shed light on shark behaviour during the winter months.  The tags used detach after a predetermined time and float to the surface, where they transmit the data data to satellites. The data at the time of writing indicates that basking sharks are active all year round, but spent much of their time at considerable depth, 200 and 1,000 metres.  It also seems they are highly migratory.  One 5 metre female nicknamed ‘Banba’, was tagged off Malin Head, the most northerly point of Ireland, in the summer of 2012.  On the 13th December 2012 the tag popped off and was located by satellite – just west of the Cape Verde islands 5000km to the south.  The still sparse, but growing, body of evidence now suggests that – in the North East Atlantic move in to coastal waters from deep water in April or May.  As the water warms and daylight lengthens (and so plankton blooms) there is an erratic movement northwards.  At the end of the summer they return to deeper water, heading west away from the British isles and mail and Europe, and some probably heading south also.  So in reality we should maybe consider the basking shark as a deep water species that happens to congregate in shallow water during the summer months in pursuit of rich feeding.

As a final aside it is often written that basking sharks are toothless filter feeders. Basking sharks are filter feeders utilising gill rakers in a similar fashion to the baleen plates of great whales to trap small planktonic creatures but surprisingly they also teeth.  In fact they have hundreds of tiny, backward-pointing teeth.  What, if any, purpose these teeth serve is not known.  They may be a vestige from a more predatory ancestry; equally there may be more still to learn of the basking sharks feeding habits.

You can see more of my shark images here

Where my images can be found

Where my images can be found